Addressing and Undressing Power and Desire 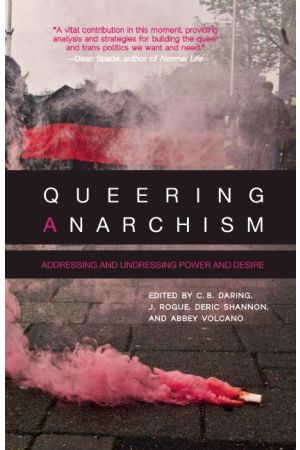 What does it mean to "queer" the world around us? How does the radical refusal of the mainstream codification of GLBT identity as a new gender norm come into focus in the context of anarchist theory and practice? How do our notions of orientation inform our politics—and vice versa? Queering Anarchism brings together a diverse set of writings, ranging from the deeply theoretical to the playfully personal, that explore the possibilities of the concept of "queering," turning the dominant, and largely heteronormative, structures of belief and identity entirely inside out. Ranging in topic from the economy to disability, politics, social structures, sexual practice, interpersonal relationships, and beyond, the authors here suggest that queering might be more than a set of personal preferences—pointing toward the possibility of an entirely new way of viewing the world.
"The divide is growing between the pro-military, pro-police, marriage-seeking gay and lesbian rights politics we see in the headlines every day and the grassroots racial and economic justice centered queer and trans resistance that fights to end prisons, borders, war and poverty. Queering Anarchism a vital contribution in this moment, providing analysis and strategies for building the queer and trans politics we want and need." —Dean Spade, author of Normal Life

“Against the austerity of straight politics, Queering Anarchism sketches the connections between gender mutiny, queer sexualities, and anti-authoritarian desires. Through embodied histories and incendiary critique, the contributors gathered here show how we must not stop at smashing the state; rather normativity itself is the enemy of all radical possibility.” - Eric A. Stanley, coeditor of Captive Genders: Trans Embodiment and the Prison Industrial Complex
Share Share on Facebook Tweet Tweet on Twitter Pin it Pin on Pinterest